Howdy!  As I’m sure you all know (or at least I hope you know), it is February!  This means two things: 1) spring break is almost here and 2) midterms are about to begin.  Due to these two events coming up, blog team wanted to share their favorite books they’ve read this past month, that way you can find a new book to dive into to either enhance your super fun spring break or a book to read as a form of stress relief during midterms.  So, without stalling any further, here are blog team’s favorite books:

What it’s about: “As children, Kathy, Ruth, and Tommy were students at Hailsham, an exclusive boarding school secluded in the English countryside. It was a place of mercurial cliques and mysterious rules where teachers were constantly reminding their charges of how special they were. Now, years later, Kathy is a young woman. Ruth and Tommy have reentered her life, and for the first time she is beginning to look back at their shared past and understand just what it is that makes them special–and how that gift will shape the rest of their time together.” (Summary & image from Goodreads)

What Ashley had to say: ” I liked this book because while it was a dystopian sci-fi book, it didn’t focus so much on the science, but more on the relationships between three friends, the loss of innocence, and the power of culture. Kathy, Tommy and Ruth’s lives are all destined to end in a sinister fate, but the book focuses less on this and more on the thoughts and feelings of these friends. It was a very introspective novel and focuses on reflection and observations about the society that the three friends live in.” 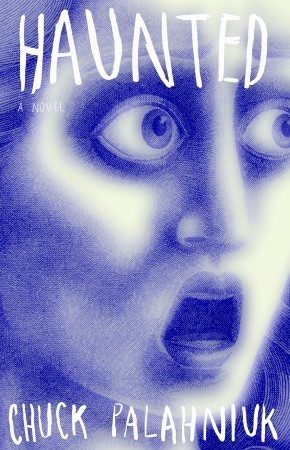 What it’s about: “They are told by the people who have all answered an ad headlined ‘Artists Retreat: Abandon your life for three months’. They are led to believe that here they will leave behind all the distractions of ‘real life’ that are keeping them from creating the masterpiece that is in them. But ‘here’ turns out to be a cavernous and ornate old theater where they are utterly isolated from the outside world – and where heat and power and, most importantly, food are in increasingly short supply. And the more desperate the circumstances become, the more desperate the stories they tell – and the more devious their machinations to make themselves the hero of the inevitable play/movie/non-fiction blockbuster that will certainly be made from their plight.” (Summary & image from Goodreads)

What Aubrey had to say: “A satirical dark comedy rather than a ghost story, Haunted by Chuck Palahniuk is one of those books that I will forever continue coming back to, not despite but for its perturbing nature. The book splices novel chapters with free-verse poetry and twenty-three increasingly disturbing short stories, satisfying my desire for all three of these types of writing while packaging it up in a neat frame narrative… and a glow-in-the-dark cover. Haunted explores Palahniuk’s typical nihilistic, motifs, and allows me–a rather boring Jersey-girl-turned-Aggie–to feel somehow connected to even the most deviant of people. Palahniuk’s ability to forge a connection between his reader and his outrageous characters shines bright through the novel’s darkness; if you are like me and are fascinated by the human need for attention and ability to self-sabotage, Haunted is the perfect piece of commentary for you.”

Caelan Cheshire- An Ember in the Ashes, Sabaa Tahir 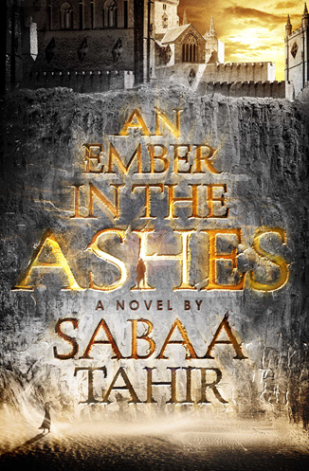 What it’s about: “Laia is a slave. Elias is a soldier. Neither is free.
Under the Martial Empire, defiance is met with death. Those who do not vow their blood and bodies to the Emperor risk the execution of their loved ones and the destruction of all they hold dear…” (Summary from Goodreads, image from Sabaa Tahir’s website)

What Caelan had to say- “If you want to dive into a new world and immerse yourself in a brutal, revolutionary, and dystopian story, An Ember in the Ashes is the book for you. There’s intrigue, blood, and a little romance—the perfect recipe for a fantastic read. Elias and Laia are two completely different people; he’s a Martial, sworn to defend society from revolutionaries, and she’s a Scholar, a people oppressed and enslaved for the mistakes of their forefathers. But when a strange series of events causes these two to cross paths, will they remain loyal to the system they have known all their lives, or will they begin to see things through one another’s eyes?”

Kirbie Koonse- Not That Kind of Girl, Lena Dunham

What it’s about: “Exuberant, moving, and keenly observed, Not that Kind of Girl is a series of dispatches from the frontlines of the struggle that is growing up. “I’m already predicting my future shame at thinking I had anything to offer you,” Dunham writes. “But if I can take what I’ve learned and make one menial job easier for you, or prevent you from having the kind of sex where you feel you must keep your sneakers on in case you want to run away during the act, then every misstep of mine will have been worthwhile.” (Summary from Goodreads, image from OneMillionPagePrincess)

What Kirbie had to say: “I immediately sought out this book after the binge watching the first season of Girls (which I also highly recommend). The creator and main actress of the show, Lena Dunham, is a hilarious human being and when I found out she wrote a book I had to have it. If you enjoy entertaining writing of unapologetically awkward times this book is for you. Dunham is truly moving and gives a real life look into what it means to be a woman. She is a be-yourself enthusiast and this novel is nothing short of empowering.”

What it’s about: “The widow of American Sniper Chris Kyle shares their private story: an unforgettable testament to the power of love and faith in the face of war and unimaginable loss—and a moving tribute to a man whose true heroism ran even deeper than the legend.” (Summary & image from Goodreads)

What Morgan had to say: “As of late I have taken a break from fiction to delve into the world of biographies, true crime, and self-help books. January’s flavor of the month was heartbreak AKA American Wife by Taya Kyle. Taya Kyle is the widow of the deceased American Sniper, Chris Kyle (crying tears of patriotism). If you don’t know who he is look up his movie on IMDB, and you’ll see the glorious Bradley Cooper.  Personally, I enjoy navy seal biographies so I had already read Chris Kyle’s autobiography, American Sniper, before reading Taya’s book. However, it is not necessary to read his book in order to understand what is going on in her novel. This is a read that will make you ugly cry and hurt your heart as you experience Taya’s account of love, loss, and redemption. Ultimately, I was surprised by her openness and humility in the face of a complex murder trial. This is a good read for those looking for a taste of bittersweet reality.”

There you have it!  I hope you found a new book to pick up and enjoyed getting to hear insights from all of blog team’s writers.  Now, go read!